A recent survey from Saga Populus interviewed 12,058 people over the age of 50 between 17-24 September 2018, to examine opinions on lifestyle, expenditure and aspirations. The aim of the survey was to explore people’s perspective on issues that arise from living longer. The results were shown across 4 age bands to help identify any trends or differences of opinion.

Below is a highlight of some of the key findings from the survey and what we think it tells us about attitudes in the mature market.

Which three experiences give you the most enjoyment in life? 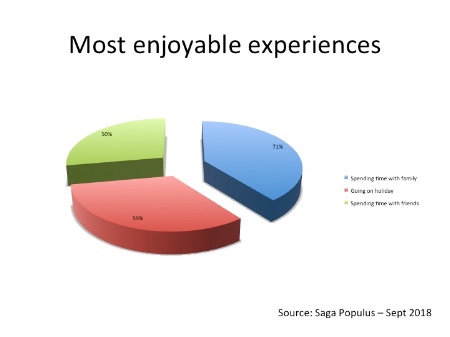 Which of the following issues do you worry most about?

35% of respondents worried most about their health. Of this response there was little difference between genders with 36% of men and 34% of women saying their health worried them.

Another interesting insight from the data is that the higher the social status of the respondent the more concerned they were to the question of the cost of social care. 11% of AB compared to only 7% of DE social class. 61% of all respondents were worried about the impact on society of an ageing population. 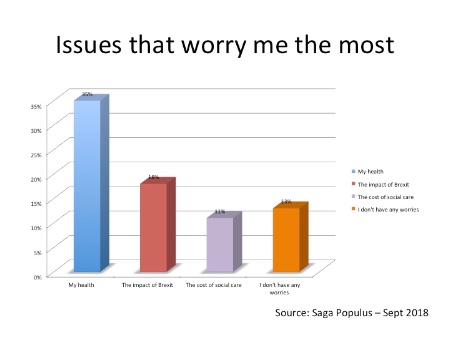 The results were also fairly consistent throughout the UK. On the question of having no worries the scores were slightly better in the East Midlands, North West and Northern Ireland.

What are the main societal issues arising from people living longer?

The need to redesign health and care services to suit an ageing population was noted by 87% of respondents as the main societal issue arising for longevity. This was closely followed by the need for people of all ages to plan and prepare financially for living longer which resulted in 75% of total respondents.

However, it is worth noting that 65% of all respondents felt that ageing was 'great and something to be celebrated', with a further 53% stating that they felt this offered 'new exciting opportunities for people and the wider community'.

For more information on the survey results click here.

Edna Petzen is director and marketing consultant at Lynden Consulting, a specialist marketing and communications company to the adult social care sector. We work with private, public and not-for-profit operators of retirement communities, extra care housing, residential and nursing care, home care, day care and providers of specialist provision for adults and older people. Get in touch to find out how we can help.